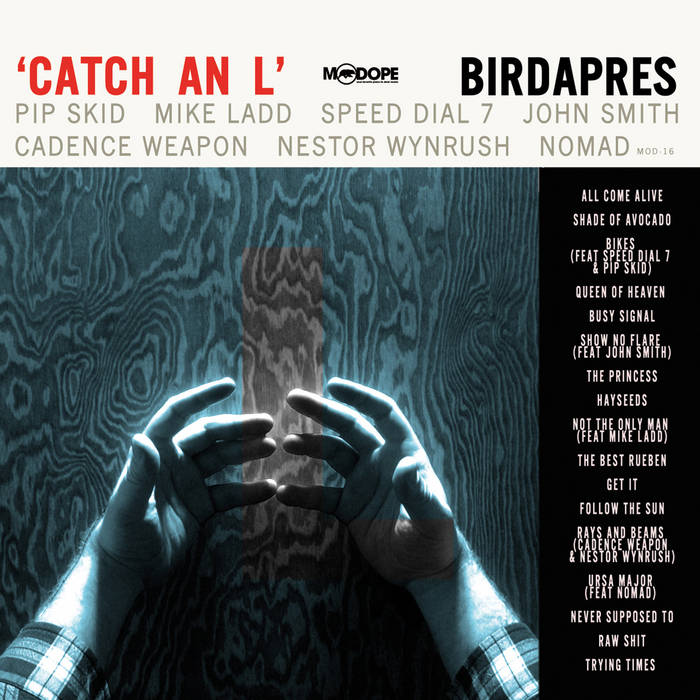 On an extra hot day this past August in Winnipeg, Birdapres set up a makeshift dining room studio with Tom De Geeter / Speed dial 7. Three hours and seventeen janky songs later, “Catch An L!” was born. Pip Skid called in an attempt to stop the album from being finished, so that he could play bocce with his Eurobro. He failed. The L happened anyways.

Like a modern day Alan Lomax (only Belgian!), De Geeter captured the melancholy, trenchant and slightly dazed world of The Old Birdy Dastard. Loops and words collided in a slapdash but urgent fashion; disembodied voices told of Rosicrucian mysteries and blind dates gone foul. Lightning in a barrel, friends. From there, things got even more eventful.

Cadence Weapon gave an old Navy bro change, Mike Ladd freestyled a rough breakup and Nomad sang a weathered Boy Scout song. Everyone, Including Pip Skid, John Smith, and Nestor Wynrush found a place at the fire. This February 24th (Not only the day that the first Mardi Gras floats appeared in a New Orleans parade, but also the day that marked the start of the Battle Of Los Angeles), join marathonofdope.com in celebrating the release of “Catch An L!” A performance will be performed at Winnipeg’s Lo Pub, and the album will be available for download that very day.

Get in on the action in any way you can, and don’t miss this steamship as it leaves harbour.